Here is what you have been waiting for ! Our February Guild meeting was well attended and another great show and tell was delivered. I have to thank Karen for taking pictures and notes from this meeting then sending it all to me so I could post this blog. All this and she was flying out in a few days for another workshop. 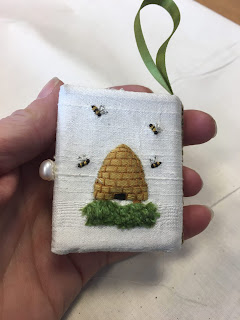 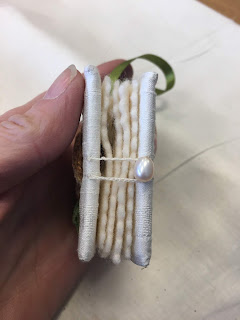 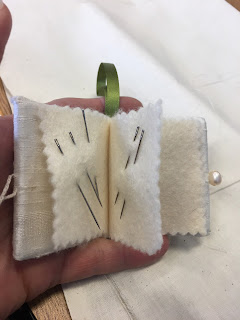 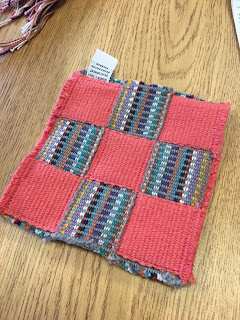 Phyllis brought her new inkle loom woven examples for her class at the FAHC in March. The workshop is March 11, 18 and 25 th 6:30 to 8:00 pm call 906 487 7302 for more information.
Also, a British friend of hers made her this sweet embroidery needle case! We all drooled!

Fiberrama which takes place this Saturday from 10 to 3 at the Community Arts Center at 126 Quincy St. in Hancock. I think that the sale will stay up for the week, if you can't make it.

Lynn brought two Inkle looms she has for sale, her friend made them and could make more to sell if there’s an interest. $40.00 small and $85.00 for the large one 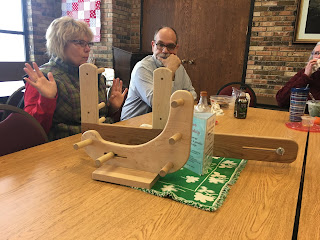 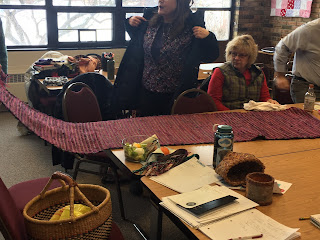 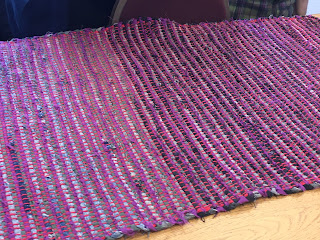 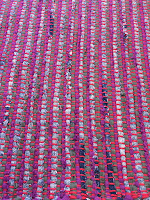 Anita beautiful skein of blue yarn that she spun on her electric spinning wheel. She also found a fabric cutter she found at Keweenaw Consignment for 20.00! They retail for about 4-5 hundred! 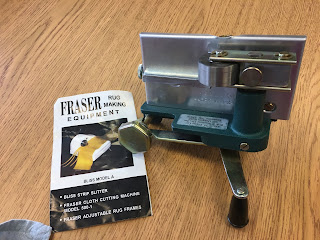 Marilyn has been spinning yarn for a sweater she’s knitting for her husband. She spun from roving and dyed with Rit dye. Her results were beautiful! 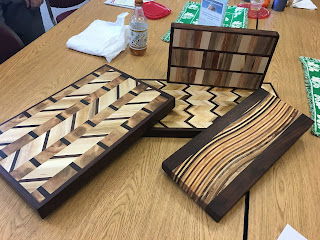 Jon is making more beautiful cutting boards and had great ones with him. Karen put in an order for the wavy one! They are walnut and maple. 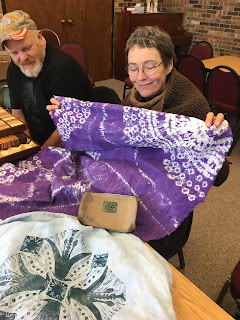 Dawn is expanding her love fibers by taking Finlandia's Spring Fiber class. She brought in some work from Phyllis’s class. She had some block printing and Shibori samples to show us. 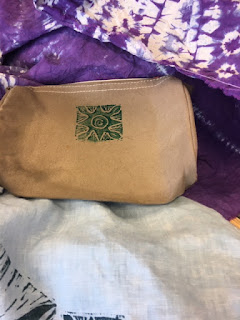 Melissa L just wove her first project now, 25 years after her first weaving class with Mary Sue Fenner at Siever’s School on Washington Island. It’s a rag rug with some double shuttle techniques as well as a place mat that’s she wove with knit material strips. She used her Union loom. 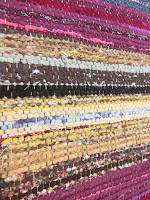 Carol Kreher surprised us with a visit. She’s still moving, but made time to join us. She reported that she now has an electric spinner, and she’s been crocheting baskets. She’ll hopefully send some photos.
She also donated a spinning wheel to our guild! Thanks so much Carol I think it might be a great resource for our guild. 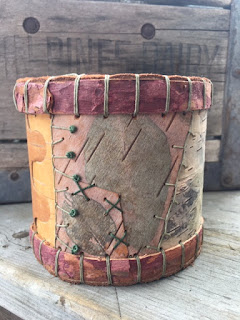 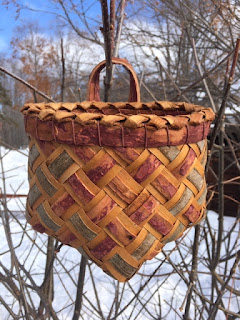 Karen is a busy teacher and shared two new baskets she’s been working on for new class proposals. She’s also trying to figure out how to weave the bias woven birch bark hearts correctly.

Look for Karen, Dawn and Poppy's classes at Porkies.org they all will be teaching workshops at the Porcupine Mountain Folk School this summer 2020. As well as a beading class with Cynthia Cote in July. Donna Kallner will teach a Yarn Dyed with Bark class in August and a September 2 day Nailbinding workshop. Debra Jircik and Mary Burns will have a collaborated Eco dye class as well. Friends of the Porkies Folk School is trying to include some great Fiber classes this summer. The prices are good and lets try to support their effort. 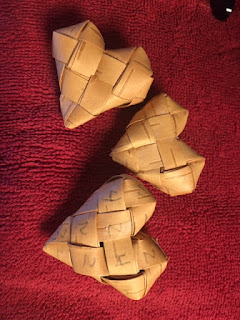 Debra did some weaving samples for the Mary Sue Fenner class. She ordered her yarn on cones for ease of warping, but the yarn looks very different from the original skein. She’s also battling the yarn over spinning into itself as she puts it on the warping board..... Any suggestions?

Mary missed the meeting due to a cold, but has been doing some weaving, she sent pictures of her woven fabric for the MS Fenner workshop in May.
After reading Tom Kinsey's article about his stash of special yarn in Handwoven Magazine. She decided to use her North Ronaldsay  yarn that she had been hoarding since 2012. It is perfect for the project and decided now was the time to put it on the loom. She said it is the softest wool she has ever worked with and while weaving on this warp she could even smell the ocean of Scotland and a faint whiff of the breed. The warp was a mixture of 3 shades of the wool and two thicknesses. Also some 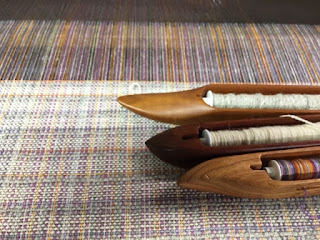 colored wool and a bit of silk was included. 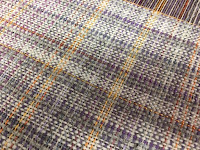 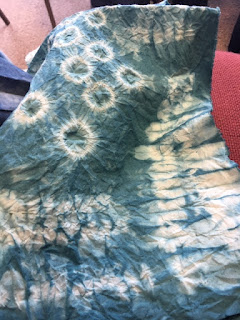 Our Presentation this month was Tritik stitching presented by Phyllis.
Tritik stitching is a small running line of stitching that is gathered up tightly. It is often used in African textiles and the designs are much bolder than in most other forms of stitching. 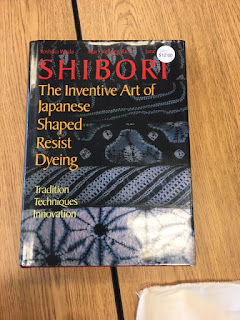 Phyllis started us on a Shibori
Project which we will dye with Dawn at the March meeting. The technique is called Tritik which is hand stitching pulled tight to resist the dye.
She demonstrated many different styles.
Mokume - a wood grain look with parallel-stitches offsetting the rows.
Ori-nui - Horse teeth - an undulating line
maki-nui - chevron stripes - where the running stitch wraps around the fabric.
kumo Spider  web -  A circular effect- folding the fabric in half and running the stitches in tight 1/2 circles.

The fabric we used was Greige ready to dye not bleached or coated fabric.


Our next meeting will be March 16 at Finlandia's Fiber studio, Dawn will be doing a dye presentation where we will dye our stitched fabric from this meeting.
we will meet at noon on the lower level of the Juttila Center or Phyllis's Fiber class.

For our April meeting Phyllis knows a spinner who would be willing to come a teach us a combination plying/spinning technique. 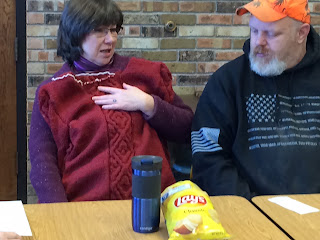 Show and Tell was interesting as always since we have such an array of talented members and sometimes visitors. Today we were joined by two students in Finlandia's Fiber program.Welcome Lisa and Nikolai!

Our presentation today was handmade paper presented by Debra and her daughters Marguerite and Reena.

Marilyn had one of the three sweaters she has been knitting a beautiful color and the cable is well done. She found a mistake and needed advise on how to repair the stitch.  Husband Jon has been making more bread boards and brought in a few to share the one on the top is made with wood from an apple tree.

Nickolai a visiting student from Finlandia’s Fiber class used a crocheted crocodile stitch for his Dice Bag. A very interesting project and he is very interested in weaving fabric also. 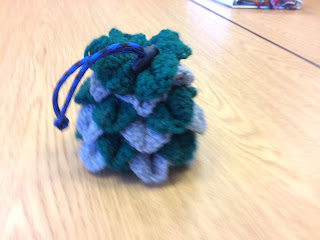 Dawn has been busy making slippers for her house guests. She is using her hand spun yarn to make slippers, mittens and even these cleaver boots with the rubber soles. She also knit a neck warmer for a friend who lives in Barrow Alaska. The slippers are a Monique Rae pattern. She does also sometimes uses Tile and Tub caulk diluted on the bottoms of the slippers to make then non skid. Dawn will teach a 2 day dye workshop at the Porkies Folk School this summer in July 2020. check out registration at Porkies.org. 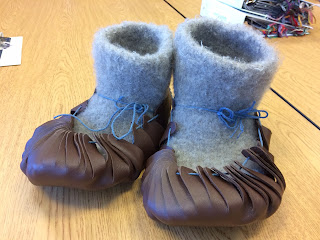 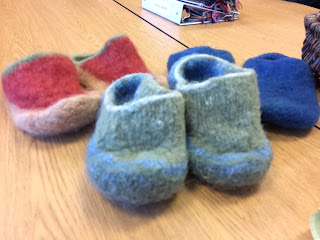 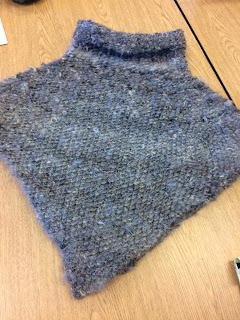 Phyllis was given these cute Chinese booties that are twined and woven from a friend. she also crocheted this really warm hat! finding yarn to finish her hat while in Milwaukee at the Yarn Junkie shop in Butler WI. Phyllis will be leading our February meeting where we will be learning Shibori stitching. we will have samples that we will use to dye in our March meeting where Dawn will be introducing us to indigo dye.

Karen is busy making plans for classes she will be teaching this year. But she found time to Eco dye a number of scarves and experiment with over dyes. Her schedule is very busy and she is teaching this twill scissor sheath and many more baskets workshops around the country. She will be teaching a Pint Cozy basket workshop at the Porcupine Mountain folk School in August. Registration will be starting February 1st at Porkies.org. https://porkies.org/event/pint-cozy/ . Registration is open now check it out! Poppy and Dawn will also be teaching workshops. 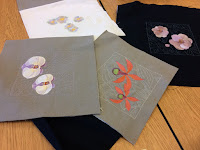 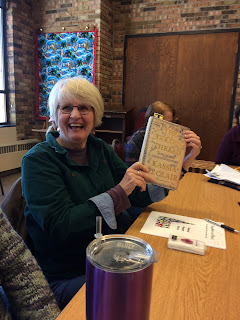 Lisa another visiting student in the Fiber program at Finlandia University shared her recently finished woven Ryijy wall hanging ‘Birch Bark'
Kathie Finished weaving these lovely
towels from a warp we helped her put on her loom last summer as a guild presentation. She is delighted with her cotolin towels. She also shared a fringe maker with our group. This she passed on to a member who was interested. 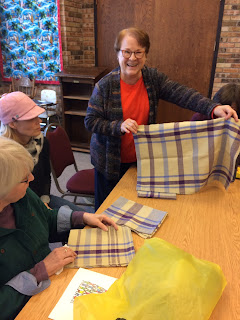 Reena
Shared her fiber projects with us. She knit this with multicolored yarn and has a needlepoint project she is working on too!

Debra  Is planning her warp for MS Fenner workshop in May. She wove a sample which has a nice drape.

MarySue will be teaching a 'One of a Kind Jacket' workshop at Finlandia May 5,6,7. Class is full right now but there may be one open spot from cancellations if you are interested call or email Debra for more information. 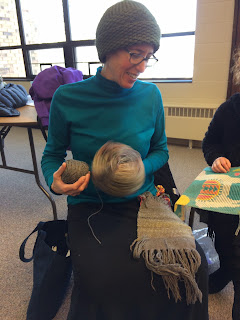 Mary is planning for the Mary Sue Fenner workshop in May. With the help form guild members on yarn choices this is what will be woven. 4.5 yard warp of North Ronaldsay natural colored wool with a few colors and some silk added in the warp and weft.

Debra and her girls showed us how to make incredible handmade paper.
Starting with 2 cups of clear water in blender they tore up paper and added it to the water, about one and one-third sheets of any paper torn into small pieces. Then they blended this for about 30 seconds.  They poured this mixture into a prepared screen while the screen was submerged in the tub of water. Carefully they removed the prepared screen from tub and placed it on synthetic chamois and removed the screen and wooden frame. A second super fine screen was placed on of the paper and a sponge was used to soak up excess water. They peeled the screen from the paper and pressed. In minutes they had a beautiful sheet of handmade paper to make into cards or even paint on the surface when dry.


Thank you Debra, Marguerite and Reena for coming to our guild meeting and sharing your paper making skills with us.

Our next guild meeting will be February 17 at Gloria Dei church 12:00 noon. Phyllis will show us some Shibori stitches on cotton muslin that we will dye at our March meeting when Dawn will do an Indigo dye demonstration.

Subscribe in a reader for updates from Buellwood Fiber & Weavers Guild

Get updates via email